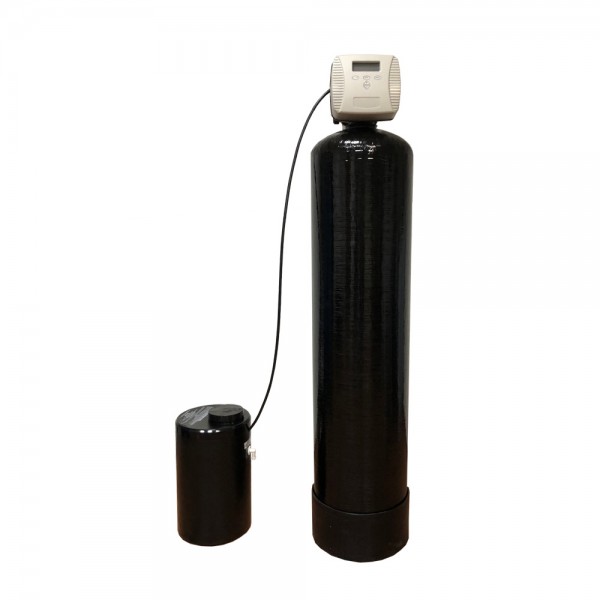 Iron and manganese in well water - What to do?

Most of the time you notice a load of your own water with iron and manganese when you notice that the water turns brown when it gets into the air. There are deposits on the laundry, on house walls, on plants, on paths. Manganese forms incrustations and is particularly evident in the form of black discoloration in the pipe network.

A water analysis exposes to iron and manganese and provides certainty about the nature of your water beyond this problem area. We recommend a well water analysis before purchasing a corresponding system if such is not available in the current form.
In order to find a suitable filter solution for you, we must also know the pH value of your water. Furthermore, data such as the required amount of water per unit time, well pump performance and other factors are important to know.

Increased iron and manganese contents are not desirable in the well water, as they lead to deposits in the pipe network. This can lead to so much deposits being found in older water pipes that the pipes hardly allow water to pass through. As a result, the flow rate of your water increases and this can lead to the unwanted separation of various deposits (iron, manganese, lime and biofilms) in the pipe network. These deposits then lead to the frequently observed browning.

Also on the taste of the water, these pressures have a negative impact. It tastes iron even from low levels of about 0.5 mg / l. The limit value for iron in drinking water in Germany is 0.2 mg / l.

Very often, an increased manganese load of the water is observed when there is an increased iron value in the water. These two problems often occur together. It is important to know that manganese can be toxic even in small amounts, especially for toddlers and infants. The limit value for manganese in drinking water in Germany is 0.05 mg / l.

Filtration of iron and manganese - iron removal and demanganization

Well-functioning iron and manganese filtration solves the problems of contaminated well water. The concomitant avoidance of sludge and deposits in the water pipes also reduces the likelihood of contamination of the water, as they represent a good breeding ground for microorganisms and macroorganisms.

Sometimes a relatively cheap solution is enough to filter iron out of the water.

Depending on the nature of your water, we will find a suitable solution for you.If necessary, this goes beyond the standard offered by us systems for the treatment of iron, manganese and hydrogen sulfide polluted water. We are at your disposal for a free first consultation.